﻿﻿Roller Coaster Week Ends Net Positive
U.S. stocks snapped a three-week losing streak in which the S&P 500 surged over 5% in the first half of the week, delivering its best two-day gain since 2020. However, a stronger-than-expected payrolls report on Friday together with an unemployment rate decline has all but sealed an outlook for further aggressive future rate hikes from the Federal Reserve. Additionally, fuel costs are rising after OPEC+ oil ministers announced it will cut oil production by 2 million barrels/day.

Jobs Growth Slows
New nonfarm payrolls slowed to 263K in September from 315K in August, while July hiring was upwardly revised by 11K. The unemployment rate declined to 3.5% from 3.7%. Average hourly earnings for all areas of employment rose by 0.3%. Over the past 12 months, average hourly earnings have increased by 5.0%, but are down from 5.2% Y/Y reported the month prior.

Treasury Yields Climb
Treasury yields advanced last week with the benchmark 10-year Treasury yield ending Friday at 3.883%, up from 3.796% the week prior. The U.S. Dollar Index more than retraced a 1% prior week decline, strengthening by nearly 1.2%. The dollar index is up nearly 20% over the last 12 months. 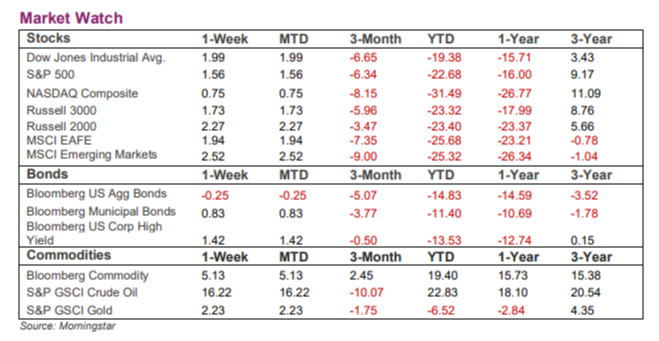 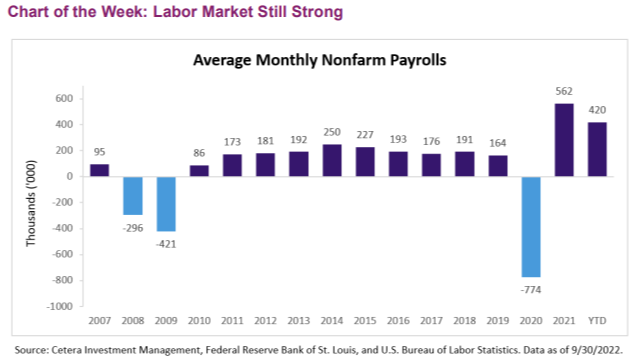 The economy has dealt with a lot of headwinds this year, largely stemming from high inflation and tighter monetary policy, leading to economic activity stalling on an inflation-adjusted basis. The good news is the labor market recovery remains on solid footing. While jobs growth slowed last month to 263,000, it was still solid when compared to average jobs growth during the prior expansion. Average monthly jobs this year are lower than last year, but are more than double the average in the last decade from 2010 to 2019.

This report is created by Cetera Investment Management LLC. For more insights and information from the team, follow @CeteraIM on Twitter.